With an amazing variety of cheap-as-chips fishing to be had, there’s never been a better time to go hit your local canal. Dom Garnett reports on the excellent sport to be had on these venues right now, with a trip to his local “cut”. 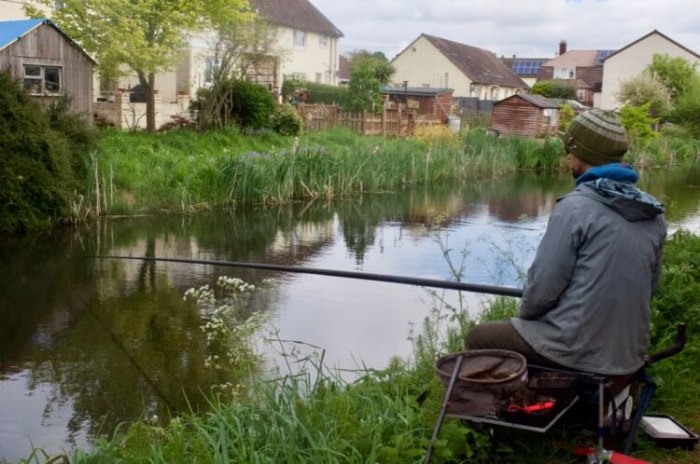 You might forgive me for feeling a little nostalgic this month, but it’s always such a joy to return to a favourite fishing haunt and find it on top form. Canals so often have that feeling of timelessness; and in so many cases they are as good if not even healthier today than they were back in the late 80s, when my canal fishing journey began with a cheap whip and some maggots in a plastic half pint glass.

Actually, in terms of affordability, it could still be 1989 on most canals! Where else can you fish for £30 a season (or an amazing £10 a season for Angling Trust members who take up a Waterway Wanderers permit)? There is a vast amount of water to try, whether you enjoy pleasure, match, lure or carp fishing.

From past to present on the towpath

Many years might have passed since I first fished my local canals, but most tactics remain reassuringly familiar. Today, on the Grand Western or Tiverton Canal in suburban Sampford Peverell, I’m going with a simple pole, maggot and groundbait approach, although I also have some worms and sweetcorn to try for bigger fish later.

A simple baiting approach: maggots, worms, corn and groundbait will cover most species.

Also here is my mate Adam Aplin. As a nightclub doorman and dad of three, Adam hasn’t got unlimited time and budget to put it mildly, so the local canals are perfect. He doesn’t own a long pole, so will try the waggler instead.

The first move on any canal is to have a quick walk and find some fish. Indeed, tempting though it is to take the first flat peg, you might be missing a much better swim by walking! Today, we find a nice looking area with space for both of us a bit further on, with decent far bank cover and fish already showing. Perfect!

With our spot settled, it’s time to take care of some basics. The first job is mixing the groundbait, to give it time to settle. This 50/50 VDE Supercup/ plain brown crumb and you don’t need loads; just enough to keep a little ball going in every so often.

Next, it’s time to plumb the depth. This is so vital yet so often overlooked. The water’s still quite clear and cold at present, so we’ll be fishing two thirds or so across at the bottom of the far shelf where there’s a nice depth of around four feet. We take our time to get this bang on; it’s best to have the bait just about scratching the bottom, with floats shotted so that just the very last bit of tip shows. The quality fish here can give quite cute bites, so if you can set up so that your quarry only needs to breathe on the bait to register a bite, so much the better.

If I was fishing a match here, I might try several lines. Today though, I’ll just keep two going. One two thirds across and one tight to a bush on the far bank to try later with a worm. I could bang on all day about the virtues of the pole, but a light waggler outfit is also good. Just like my pole rig, Adam uses a simple 4lb mainline to low diameter 3.3lb hooklegth; fine enough to get bites but strong enough to land a bonus fish. The waggler is quicker and less faff to set up than the pole and, tellingly, Adam is already into a fish while I’m still setting up a second rig!

One of the golden rules of canal fishing is to keep feeding little and often, and be accurate. Today, the fish are right up for a maggot attack and we are both quickly into small perch and beautiful rudd. These lovely fish average two or three ounces, but odd better fish soon enter the mix too. 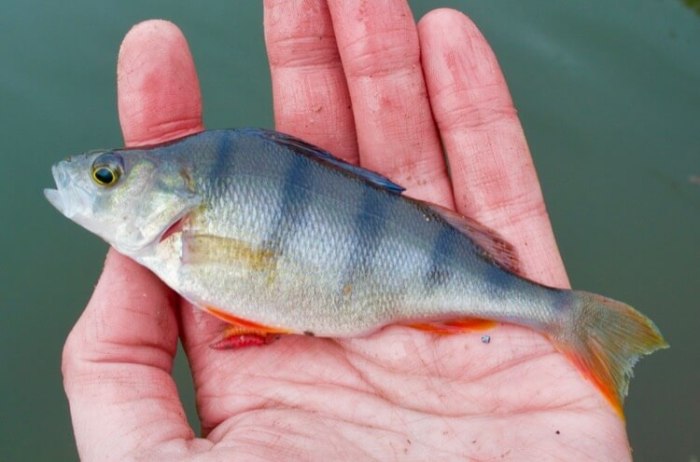 We also get the usual assortment of passers by, dog walkers and even the odd watercraft. What can I say? As a canal angler, you have to embrace this. If anything it adds to the day. We have a good chinwag with the locals and even when two stand up paddle boarders come through, the fish soon settle- on any canal, however, I’d recommend feeding another nugget of groundbait after each such disturbance, just to settle the fish.

The time is soon flying past as we keep catching. The rudd are great, but I’m also curious to see if we can get a bigger “bonus” fish or two, whether that’s a bream, tench or perch. This is another great thing about canals and a good reason to pack some extra bait that the small stuff won’t devour so easily.

First put in by the far bank feature and the predictable happens- it buries and a perch comes my way. Then another two, before it goes dead. I’m just wondering why as I jig my worm on the spot, when I get my answer in a flash. The elastic zooms out and it’s a small  pike this time. In the Tiverton AA Matches, these fish count! Today, however, I don’t want him terrorising the contents of my keepnet, so it’s “hit the road, Jack”.

As our session progresses, it’s interesting just how many plump rudd we are getting, yet not a single roach turns up. We suspect they are spawning, which is fine with us. This isn’t the place for a close season debate, but suffice to say that in spite of the canal (and most others) having no such restriction, fish that are breeding tend to have zero interest in bait.

Also gearing up to breed is a swan, however, who is in full blown territorial aggression mode! Sensibly, we give him a wide berth as any angler should. The paddle boarders tell us he actually attacked them as they went past! Slightly distrubingly though, the big bully (who the locals are already now calling Mr Angry) also comes past us at one point to physically have a go at a group of ducklings that have been separated from their mother. Needless to say, we keep well clear of this white bully and peace soon resumes.

Along with beautiful spring colours, though, you might say there’s rather a tide of territorial and sexual tension right along the towpath with the local songbirds and moorhens, who all seem to be courting and squabbling. In contrast to us, happily, as we take it easy and soak up some peaceful fishing.

With so much of angling focussed on size these days, it’s lovely just to enjoy regular bites from beautiful wild fish. That said, I fancy that sooner or later one of us surely has to get a real netful of something?

There are definite ways to try and achieve this. One is to try a worm or a piece of corn. Another is to try a slightly bigger hook and a bunch of dead maggots, which is something we both attempt. If you never bother with them, it might seem weird that dead maggots might be a better bait than lives- but there’s definitely something in it. For one thing, they tiddlers aren’t so interested in them as they are in wriggly bait; but equally, they stay put and won’t wriggle into the often weedy, silty bottom of the canal. 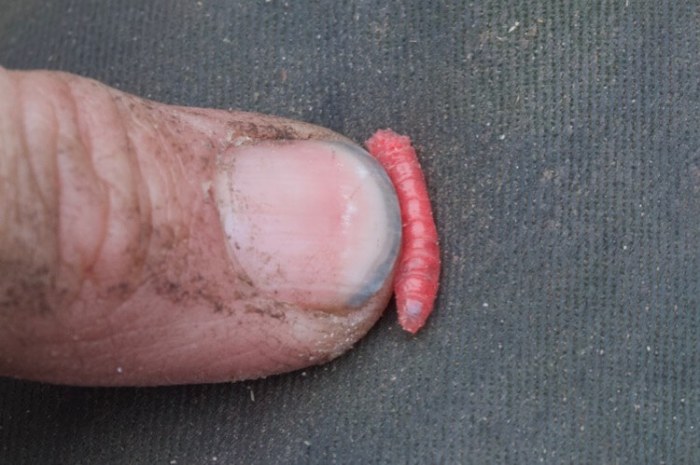 By rolling them on your knee, it’s easy to create a dead maggot hook bait.

You can kill maggots by freezing them, but on the bank an easy way is to simply “roll” them under your finger for a few seconds (as above!), until they become stretched and lifeless. Three to five on a size 12-16 hook makes a brilliant bream or tench bait!

We both try this at intervals, but with wives and kids and all that other stuff to return to later in the afternoon, time is running out. Which is why I could not be more relieved to hear the call of excitement from Adam, just as I’m pondering when that “last cast” should be.

“I’ve got something decent here!” he says. “Could be a tench?”

Judging by the bend, it’s no lazy old bream. Mind you, he’s on quite light gear- the delicate 10ft lure rod he’s using has proved ideal for flicking out a waggler. He plays it gingerly, only applying extra pressure when it tries to wrap him round near bank reeds. The snags are not too severe at this time of year, but by July, heavier tackle will be needed to wrestle the tench out.

What a great little session! With simple tactics and relatively fine tackle we enjoyed bites galore and fish of all sizes.

It’s bang on cue really, and a perfect way to end our short but sweet session. In spite of the precision of the pole, my fish seem to be smaller typically, although I have more perch in my bag. Adam, on the other hand, has landed several beautiful roach and as well as that late tench.

As we carefully release our fish and head back to the city, it strikes me just how lucky we are to have canals like this locally- not that the story is that different in so many other parts of the country, where the exact same tactics will also work.  We’ve  great little session, not to a mention cheap session! The worms came free, while we’ve used only a modest amount of groundbait and a pint of maggots between us. At just £6 a day or just £30 a season, the ticket is dirt cheap too.

For anyone who fancies a spot of canal fishing this year, it’s well worth finding out who runs the fishing on your local cut! There are literally thousands of miles of canal to go at- and just about every one of these waters has a healthy mix of fish species, from roach and perch to specimen carp.

-We fished the Grand Western Canal, run by Tiverton & District Angling Club, which is one of the prettiest waters in the South West with excellent year round fishing. For further information, see https://www.tivertonanglingclub.com

-A great value option with canal stretches from Rural Wales and Yorkshire is the Waterway Wanderers Scheme. It has stacks of venues and is just a tenner a year for Angling Trust members! See the Canal and River Trust website for details HERE.

-For a complete guide to canal fishing techniques, along with recommended venues and locations all over the UK, Dom’s book Canal Fishing, A Practical Guide is also well worth a look! It’s available both as a hardback edition or as a digital e-book from Amazon UK.