From dead Nazis to severed fingers, there have been some truly bizarre and amazing things found inside the stomachs of fish! John Cheyne reveals some of the stranger finds, from the hilarious to the macabre…

While anglers will testify how fussy some fish can be, there are plenty of species that will eat virtually anything they can swallow. This includes surprising and completely inedible things that are swallowed from sheer curiosity. 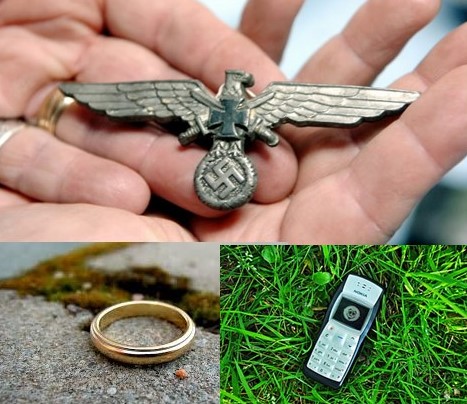 Stranger than fiction: just some of the oddities found inside fish!

In my own fishing life, the story that particularly stands out was from the day I took my son fly fishing for rainbow trout and promised we could take a couple home to eat. I advised him to try a Daddy Long Legs fly, as I was sure that’s what the fish were rising for on the small lake. But what else mught they be eating?

“When we get them home and gut them we will be able to see if I’m right, as we can examine their stomach contents” I said confidently. Sure enough we both caught a nice fish on the Daddy Long Legs, so I was sure we would find some real ones inside the fish. We got home, gutted them and what did we find ? Two small stones, a fag butt and a piece of plastic from a Co-op carrier bag ! Good luck “matching the hatch” when the trout are eating that lot !

Of course, the weird things found inside fish can also be a worrying sign for our planet. Plastic pollution in our oceans and rivers is increasing at an alarming rate and it was while I was sleuthing around the internet for some good examples of plastics found inside fish that I also came across some gob-smacking stories of other weird and wonderful things seemingly eaten by fish. So here is my Top Ten.

10) Message In A Bottle – A report in the May 18, 1894 edition of The Manitoba Morning Free Press in Winnipeg, Canada tells of a 140-pound Kansas catfish caught by a keen angler called Douglass Smith. “In its stomach was found a small bottle, securely corked, containing this message: “Whoever will find this will please send it back to me. H.E. Pipes.” On further investigation it was discovered that Mr. Pipes had thrown the bottle in the Kaw River three years earlier, 75 miles from where the fish was caught. 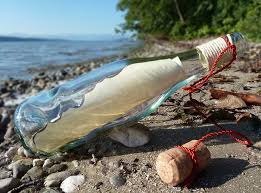 9) Cash – Earlier this year some anglers in Melbourne, Australia were snapper fishing and when they gutted one of their catch, neatly inside was a crumpled up $20 bill. You only have to catch a couple of those and it will pay for your fishing licence ! 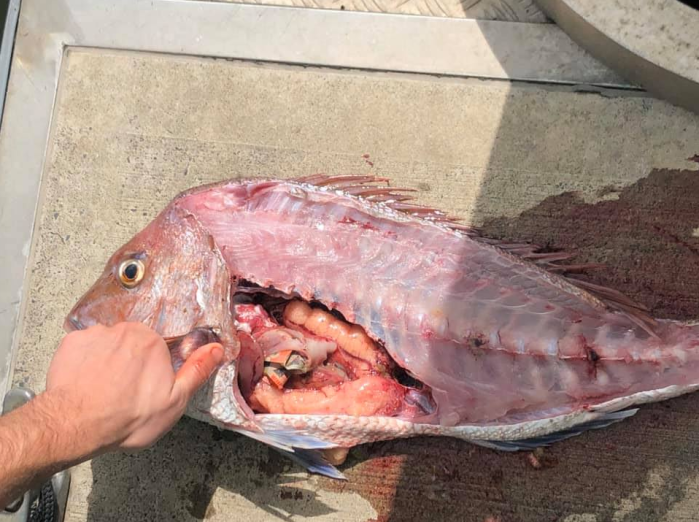 Look closely at the picture and you can see the $20 bill in the fish’s stomach cavity. Pic source Facebook/Sharkmen Fishing Charters Melbourne

8)  Untouched Sandwiches – John Colquhoun wrote a book called The Moor and The Loch in 1840 which included the story of a particularly odd case. He recounts how a friend of his caught a Saith (Scottish name for Coalfish) which was in turn grabbed by a huge cod as he reeled it in. Both fish were safely landed and on gutting the cod he discovered a brown paper pack of sandwiches “enough for luncheon for a pretty large party” seemingly they were none the worse for having been inside the cod, but unfortunately he didn’t confirm whether his friend ate them or not !

7) A Human Finger – Idaho’s Priest Lake in 2014 was the venue for this rather grisly story. An angler called Nolan Calvin found the finger when he was gutting a trout that a friend had caught. He immediately put the finger in the freezer and called the police, who came out and picked it up. Detectives were able to get a fingerprint from the rogue digit, and they established that it belonged to Haans Galassi of Washington who had recently lost four fingers when a tow-rope got wrapped around his hand when wakeboarding. Amazingly the fish was caught a full eight miles from the accident site.

6) Nokia mobile phone – Old-Skool Nokia mobiles are renowned for being virtually bomb-proof and it would seem they are fish-proof as well ! Andrew Cheatle thought that he had lost the phone for good after it slipped out of his pocket while he was walking his dog on a beach in West Sussex. Yet, just a few days later his wife got a call from fisherman Glen Kerley saying that he had retrieved the Nokia handset from the stomach of a 25lb cod. Speaking to The Sun, Cheatle said: “I thought he was winding me up but he assured me he had caught a cod that morning and was gutting it for his fish stall and that my Nokia was inside it – a bit worse for wear. I didn’t believe him but went to meet him and found it was my phone – a bit smelly and battered – but incredibly it still worked after I let it dry out.”

5) A man’s private parts – OK this is a bad one. Jerry Masterson was fishing off Tampa Florida when he caught a beautiful 80lb Yellowfin Tuna, but he was in for a surprise when he began to fillet it. There inside it’s stomach was probably the last thing he wanted to see, the decomposing genitals of an adult man. He of course called the police and reported his gruesome find, but as yet nobody has claimed the missing item… Ouch !

4) Engagement Ring – Thankfully this is a story with a much happier ending. Christopher Eggington was fishing with his girlfriend at Chapel St Leonards, near Skegness and had a very successful day. However it wasn’t until his girlfriend Sandra started gutting their catch that he realised just how successful. Inside one of the fish she found a beautiful diamond engagement ring, and while she was screaming with glee and holding it up, Chris, got down on one knee and popped the question. Sandra said yes and the couple are now engaged. We are hoping the name the date for the wedding soon, so that they can make it all O-fish-cial !

3) A Dead Nazi – It seems like every list like this has to have a Nazi in it somewhere, but unbelievably that’s exactly what is believed to have been found inside a huge Polish Wels catfish. The 413lb catfish was caught from the Oder River. The fish’s stomach contents were examined and amongst a lot of part digested fish was found a WWII German SS cap badge and a number of human bone fragments.

The stomach contents were then analysed by scientist Dr Patek Lojko who commented “We have only a few fragments of bones, and much of the skeleton is missing. We don’t have enough evidence to determine the cause of death, but we are almost certain that the bones are those of a German SS officer.  We found a SS hat eagle, as well as two buttons and a cufflink from the same uniform. Unfortunately, many bones and artifacts seem to have been “evacuated”  naturally by the fish over the years and the DNA in the bones was damaged by the gastric juices, so a formal identification is impossible for the moment.” Incredible, but seemingly true ! 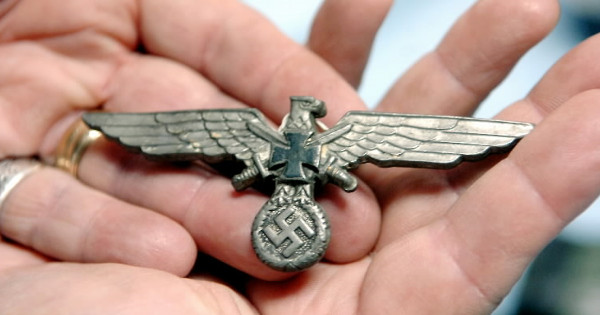 The cap badge that was reportedly found inside the catfish.

2) Whale had 6kg of plastic in it’s stomach including 115 drinking cups – While of coarse we realise that a whale is a mammal, not a fish, we think this illustrates just what a huge issue were are currently facing with plastic pollution in our oceans. Finding diamond rings, sandwiches and mobiles phones in fish may be unusual and a great story, but unfortunately, finding plastics inside marine animals is neither unusual or amusing. The example we have sited is that of a sperm whale washed ashore off the Indonesian coast in November 2018 with almost 6kg of plastic inside it, including 115 plastic drinking cups. Right now our rivers and oceans are being treated like a giant liquid landfill site and it needs to stop ! You can read more about how Angling Trust is helping to tackle this issue HERE 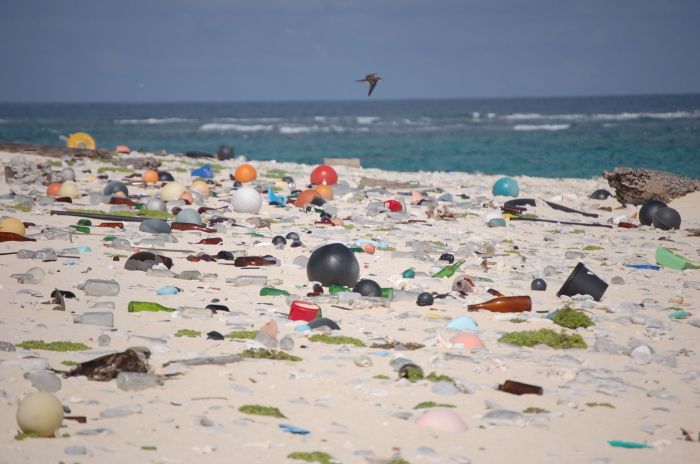 1 Microplastics in British fish – It’s not just large pieces of plastic that are a threat to fish and other marine creatures. A recent study found that 28% of fish living in the Thames estuary and 39% of fish in the Clyde estuary have eaten microplastics. Microplastics – are designated as pieces of plastic smaller than five millimetres. The recent scientific research examined the digestive tracts of 876 fish and shrimp from the Thames and Firth of Clyde. Of the 21 species investigated, 14 had microplastics in their guts. More details of the study can be found on the Natural History Museum website HERE 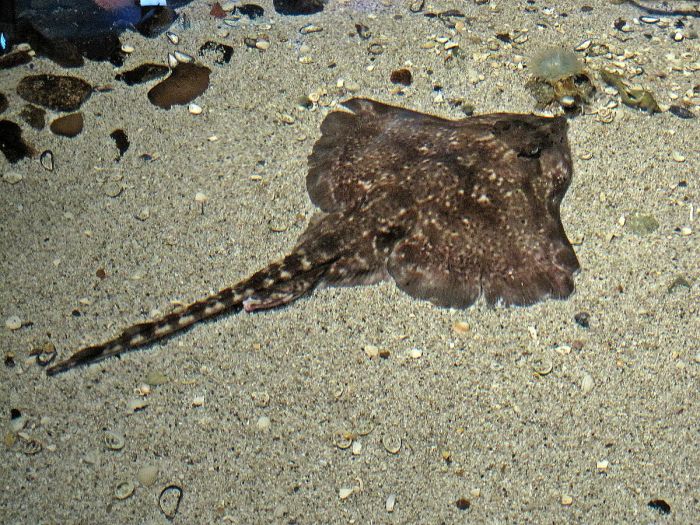 Well we may have ended this list on a rather sobering note, but we think you will agree that while people have been telling amazing stories of things inside fish, since the times of Jonah and The Whale, it’s only in recent times that we have really begun to understand the serious environmental threat we have created by allowing so much plastic to enter our rivers, lakes and seas. We can all do our bit to help change this, of course, and anglers can take the lead by removing litter from the waterside (regardless of who dropped it!). Do take a look at our Take 5 Campaign and the brilliant new  Anglers’ National Line Recycling Scheme to find out more on how you can do your bit.