Escaping to Somerset for a lure angling session, the Angling Trust Freshwater Team had an eventful recent trip to the Taunton to Bridgwater Canal, as Dom Garnett reports.

Even for those who work in and around angling, it can be tricky to squeeze in some pleasure fishing. So when teammates John Cheyne and Alex Clegg happened to be down in Somerset for our recent Fisheries Forum, a short session the following day was a must. After all, we might talk about all manner of angling issues every week, but the last occasion we took a time out and wet a line together was back in the summer.

As host, it was down to me to make the call with the fishing. Both John and Alex are all-rounders, which helps keep options open, but wet weather quickly ruled out trotting on the local River Tone. Where better, therefore, than the canal? Rammed with jack pike and some decent bonus perch, it would be perfect for a quick hit on lures. Equally attractive, however, is the minimal faff to get sorted with a day ticket, with forward thinking Taunton AA offering these online (an option that so many other angling clubs could also benefit from).

A meeting on the towpath

Some of our lure choices on the day. White and yellow seemed the best colours in the rather grubby water.

With grotty recent weather and some austere New Year’s resolutions to start 2020, I was reassured that the lads had enjoyed a hearty fried breakfast. Our meeting point in the village of Creech St Michael offers a cute, accessible stretch of canal with a good blend of fish. I’d already put my foot in it by describing how clear the waters can be, due to low boat traffic. Inevitably, we found it murkier after heavy rain.

Lure rods quickly assembled, there were some decisions to be made. Would we go for the perch or pike, or hedge our bets? The small pike are so prolific here they’re hard to avoid; hence we opted for light wire traces. The colour in the water suggested the perch wouldn’t mind so much anyway. Each of us had a light lure rod in the 2-10g stamp and braid of at least 10lbs. Light enough for decent sport with any perch, but with enough welly to land those rogue pike, was the general idea. 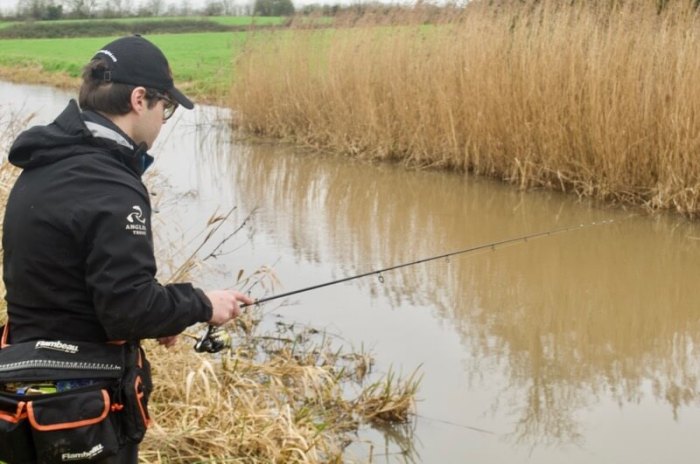 In terms of lures, it’s always curious to see what other anglers favour. Little shads in the 2-3” range on jig heads of just two or three grams seemed to get the nod initially; although we also fancied some classic lures and I began on a mini spinnerbait. Indeed, if you can find these in smaller proportions to the usual pike models, they make cracking perch lures for coloured water.

In spite of leaden skies, the day began in high spirits as we made our first casts and chewed the fishing fat. None of us had been having very spectacular results of late it must be said. I’d scraped barely a pound at my last winter match, while John’s recent day on a big perch fishery had been rendered almost biteless by plummeting temperatures. Of course, some of you will also know the excellent Lure Anglers’ Canal Club he runs, which has some amazing value fishing and popular matches up in the Midlands.

This chunky perch fell to a slow retrieve, gently tapping the lure across the bottom.

Our iffy winter fortunes would all change on John’s very first cast, as it happened, with a rod wrenching take signalling that the pike were hungry. It didn’t stick, but was an encouraging sign that the canal might be on song in spite of appearing more like soup than the proverbial gin.

I then missed an early pike on the mini spinnerbait, before John hooked a chunky perch. His choice of a white and yellow shad seemed ideal for the conditions, cutting through the murk nicely. Meanwhile, Alex Clegg was also soon off the mark with a jack pike to a similar sized shad. A match angler by habit, he also enjoys chucking lures in anger these days.

We covered water pretty quickly, albeit with John more slow and thorough in his approach than Alex, who, like my older brother, has decidedly itchy feet and always has his eye on the next spot! And it paid off handsomely as he was soon to connect with the best fish of the day. Ok, so we weren’t about to call the Angling Times with giddy voices,  but these canal pike are real battlers and stupendously good fun on light gear. And a four or five pounder tends to be a decent one here. 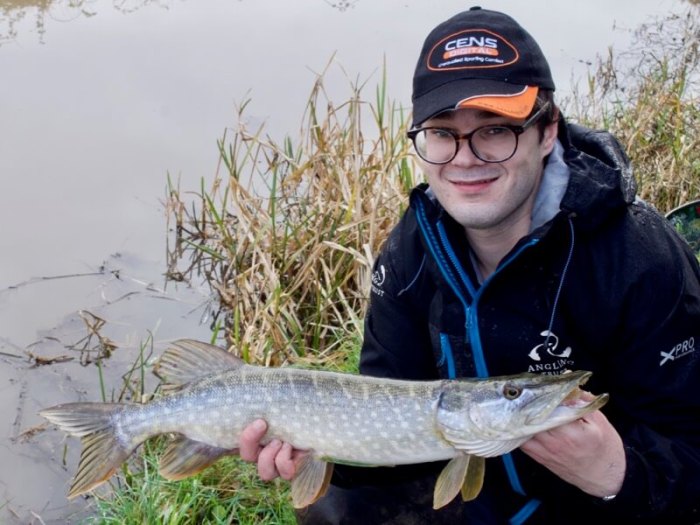 This pike, a decent one by canal standards, gave Alex a lovely scrap on light gear.

With the perch still scarce, perhaps we might get a better stamp by upping the size of lures? A 2-3” offering might seem a bit diddy, but compared to typical prey on the Taunton to Bridgwater Canal, it might even be considered large compared to the staple prey. As I explained to the others, like so many Somerset waters this place is teeming with invasive sun bleak –or “motherless minnows” as the locals call them. These little blighters barely reach 3-4cm in size, but effectively give perch and pike fry-sized fodder year round. Could this be why the place is swarming with small predators?

John found hordes of them a few yards along, where a “pinch point” in the canal had caught his eye. In a rare moment of clarity amidst the murk, he was about to get a gilt-edged opportunity, as the surface suddenly erupted with fleeing sun bleak. Dropping his shad into the disturbance, it was instantly seized with all the subtlety of a kick in the balls. A surging, angry presence immediately shouted pike, rather than the solid perch we were dreaming of. If only these creatures were as reliably aggressive as the pike.

Either a very strong perch or… yep, you guessed it, another jack pike.

Last off the mark

As much of a relief as it is to see your guests off the mark (and I spend as many days guiding as fishing in Somerset each year, usually with a fly rod for pike) my first fish required a measure of patience. As is so often the case on the small canals, we are intent on dropping lures within an inch of far bank features, but the one we’re standing on can be just as good.

My pike came right at the end of the retrieve, in fact, in one of those moments where the angler gives the lure a final flick to check it’s moving well. Even in the greenish water, I saw the fish come and obliterate my lure as clear as day. Call it a pride or blank saver, even at three or so pounds it was still a very pure moment of excitement. And a relief for the bloke who recently co-authored the book Hooked on Lure Fishing! 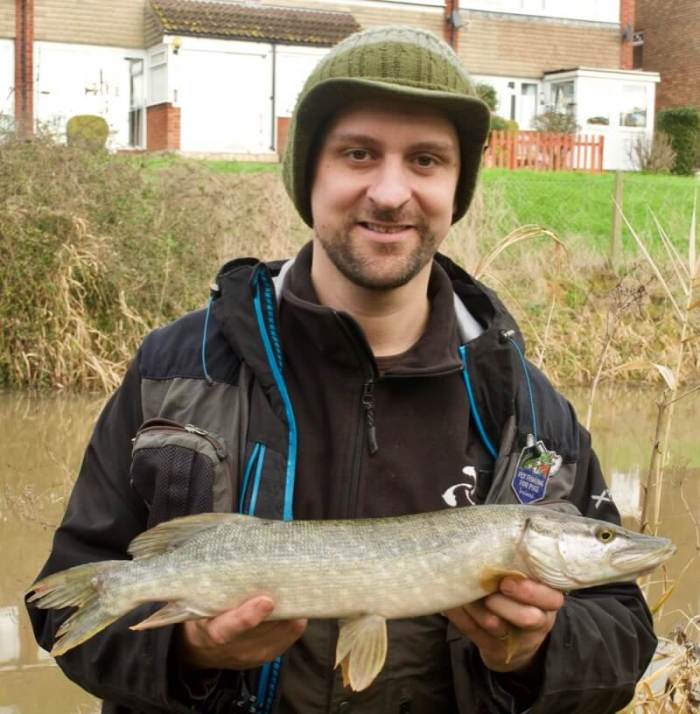 Indeed, once you’ve had that first fish, it’s easier to relax and go with the flow. It was also rare opportunity to put the world to rights in good company with my colleagues, anyway. Nor are we ever short of things to discuss in the current angling world, from the urgent need for angling clubs to make use of digital technology, to the dramatic rise in popularity of lure fishing for anglers short on time and storage space.

Of course, the canals are also a hot topic for biosecurity and invasive species these days. Those motherless minnows might provide fodder for predators, but other species can be far less welcome. The nearby Tiverton or Grand Western Canal now has a terrible infestation of invasive “water soldier” plants, for example. Hence it’s important for us to get the message out to anglers to be extra careful with their gear.

Nets and any wet kit are a particular peril, especially when you consider just a tiny fragment of invasive plant or a single organism could lead to an outbreak that blights a whole waterway or costs your local club a fortune to control. We even left one or two stickers near the access point with the “Check, Clean, Dry” message.

Time certainly flies when the fish are biting, and our little session was a good advert for active angling. So often our sport is seen as a lazy, time-consuming hobby, when the reality can be so very different. In our brief half day session, we must have spent four hours on our feet with around two miles covered. Reasonable exercise and top marks for effort then, but who would have the last fish? 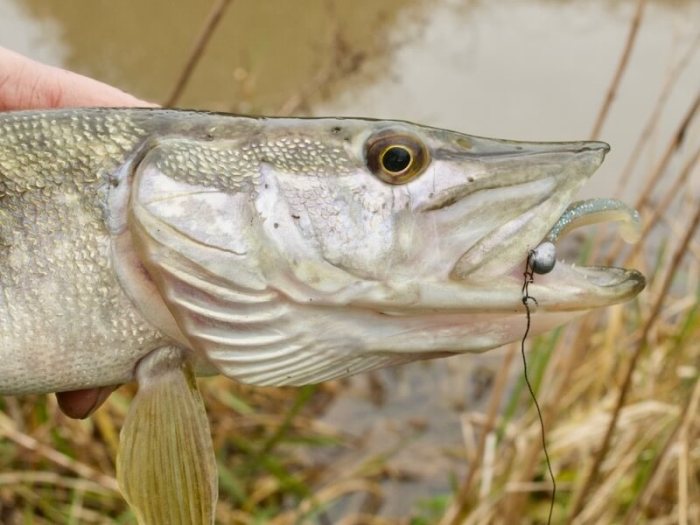 Yet more teeth marks for the lure collection.

I could see the others scale up a bit for the pike with larger lures, to good effect as both added another fish. It’s the perch I really craved, however, and so after my next jack I decided to make the switch to a drop shot set up. This looked spot on, cast or simply lowered around weed rafts or other cover, but try as I might, the perch just wouldn’t take.

And so, with our bellies rumbling a long trip back home to the Midlands and North for my colleagues, it was time to call it quits. All in all, a hugely enjoyable session with a total of seven pike and a perch between us. Alex had the most and biggest fish with three pike, while John gets an honourable mention for the only perch. Not bad for such grubby water. White lures probably came out on top today, with the lion’s share of the fish attacking from cover on either bank. A great little session for our team day out.

If you enjoy this blog, don’t forget to subscribe to be the first to get our latest news and exclusive stories each month! We’ve covered a huge range of topics in the last twelve months alone, from uplifting angling projects, to the various ways your Environment Agency rod licence money is being put to good use. Meanwhile, we are also on Instagram (follow us here: @anglingtrust_freshwater).

Another great source of news and inspiration, however, are the various Angling Trust regional pages. Wherever you live in England, there’s a page for your area, with updates and info to keep you informed and inspired. Do hit the link for your region below and give us a like and a follow: